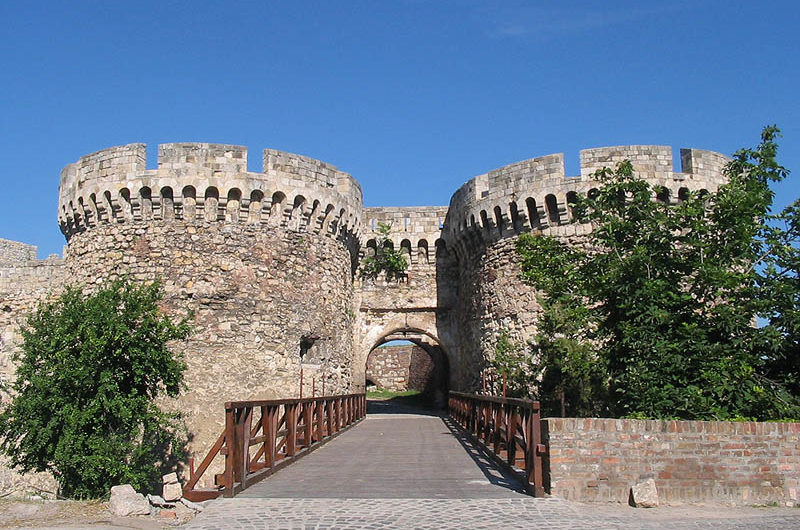 There are the remains of nearly forty fortified medieval cities and fortresses in Serbia. Serbian fortresses were built as strategically important geographical points alongside rivers, key roads or on the defense border lines. Some fortresses were only military outposts  while others protected manor – houses and their squire’s estates and some fortresses were intended for defending the monasteries. As the significant monuments of the European military architecture  they also represent important cultural and historical part of our touristic offer.

Situated in the capital – Belgrade, at the confluence of rivers Sava and Danube, Kalemegdan is one of the most important old cities. The fact that 115 battles were fought here tells us a lot about significance of the fortress. The ancient Celtic settlement of Singidunum was first raised. After, the city was ruled by the Romans, Byzantines, and Hungarians. For a while the city belonged to Serbian King Dragutin. And for centuries the Turks and the Austrians fought for it.

Today, the fortress is surrounded by Kalemegdan Park and has been transformed into an open – air museum and a place of many cultural events that are being held every year.

Is also known as Gibraltar on the Danube. It is located on a rocky hill opposite of today’s Novi Sad city. Because of its dominant geographical position, many people such as the Celts, the Romans, the Avars, Byzantines, the Hungarians, the Turks and Austrians at the end who built the fortress that we know today in 18th century, badly wanted to conquer it for centuries.

Petrovaradin is very well – preserved and it’s the second largest fortress to be found in Europe. It is considered to be one of the best achievements of the European military architecture of the 18th century.

The fortress was erected by  despot Djurdje Brankovic as the new residence of the state. From here the battles were fought against strong attacks of Turkish Empire in 15th century. It lies  on the confluence of river Jezava and Danube and it’s considered one of the most beautiful fortresses  in Europe. It was conquered by the Turks in 1459 and this was the end of Serbian medieval state.

Today, the fortress is open for visitors and represent a space for cultural  and sports events of the city of Smederevo.

Situated in the center of the city on the Nishava River bank, represents one of the best – preserved and one of the most beautiful Turkish military forts in the middle Balkans. It was built in the 17th century where earlier a Roman, then a Byzantine and finally a Serbian medieval city stood once.

Within the complex today there are a lot of cultural and tourist contects.  The Arsenal and Bali Bays Mosque have been transformed to exhibition galleries. Summer stage represents an important cultural centre where numerous concerts are been held. The most important is Nishville Jazz festival.

Golubac is a medieval fortress erected on a  sharpe ridge above the Danube  River, at the entrance to the Djerdap George, 4 kilometers downstream from the town of the same name. This place was fortified very early in the history because of important strategic position. The fortress was built in 14th century and it was conquered several times by the Hungarians and the Serbs. The Turks ruled more than the others. Golubac is a real military fortification.

It is one of the smallest fortresses compared to Belgrade fortress or Petrovaradin or Smederevo. However it is a must see tourist destination because of its beauty and location, being the entrance to the second largest gorge to be found in the world after the Great Canyon.

iSerbia Travel & Events knows every inch of these great and impressive fortresses. We are  waiting for you to share our experiences with you so you can feel the spirit of medieval  life and take some amazing memories with you.

Visit this link and follow us on facebook. U will find interesting program which gives u the opportunity to visit some of these beautiful fortresses and much, much more!