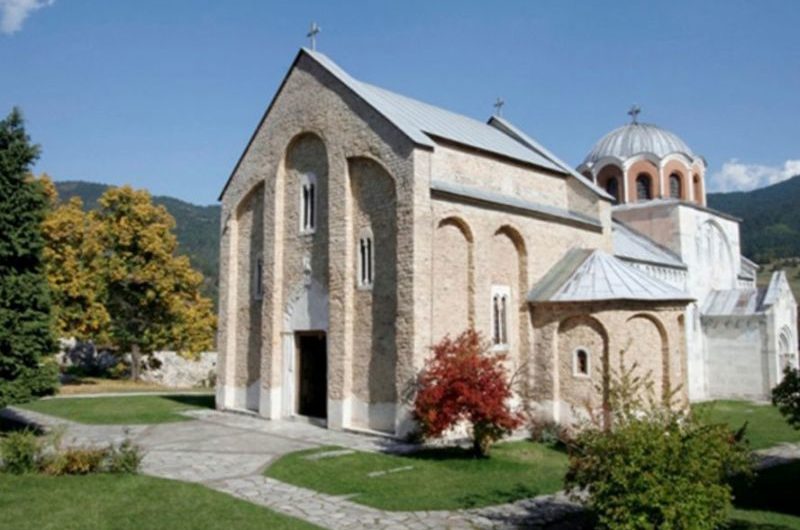 When visiting Serbia, medieval Monasteries and Churches are something that every person should see or at least a small part of them. Throughout Serbia and the region there are 405 Monasteries of Serbian Orthodox Church and around 200 more old foundations. On Kosovo and Metohija there are over 2500 remains of Serbian sanctuaries. Most of them were gone in its tempestuous past.

We like to call our monasteries The Soul of our country, because no meter which nationality or religion you belong to you will always feel something special and spiritual when entering this old holly places. Painted with beautiful frescoes and decorated with amazing mosaics made by different artists and monks that lived in these monasteries they are surely unique works of art.

Monastery Studenica, founded in 1196 by King Stefan Nemanja, dedicated to the Presentation of the Holy Virgin, is the mother-church of all Serbian temples. It’s located in South – West of Serbia, 40 kilometers from the City of Kraljevo and it’s of the biggest and most important Serbian monasteries.

Monastery Zica has been built between 1208 and 1230 by Serbian King Stefan Nemanjic, the First-Crowned. In 1219 Zica became the first seat of the Serbian Archbishopic. The church, dedicated to the Ascension of Our Lord, displays the features of the Raska school. The ground plan is shaped as a spacious nave with a large apse at its eastern end. The central space is domed. The church was built of stone and brick. Architecturally, the Byzantine spirit prevails.

Mileseva monastery was founded between 1234 and 1236 by Serbian King Vladislav. The monastery is situated in a valley of the Mileseva river, near Prijepolje. Mileseva is one of the most important Serbian sanctuaries and spiritual centers. And its famous of its unique white colour.

The Sopocani Monastery, dedicated to the Holy Trinity, was founded by King Uros I. The church and the narthex were built in the 1260s. The exonarthex with the bell-tower was added in the first half of the fourteenth century. Several members of the royal family were buried in the monastery, including the King’s mother Anne Dandolo, Stefan the First Crowned, Grand Duke George and Uros I himself.

The Gracanica monastery, near Lipljan in Kosovo, is one of the last monumental foundations of King Milutin Nemanjic. Built on the ruins of the former Church of the Holy Virgin, the monastery, finished in 1321, was dedicated to the Dormition of the Holy Virgin. On the southern wall of the chapel is written the king’s charter, including the following words: “I have seen the ruins and the decay of the Holy Virgin’s temple of Gracanica, the bishopric of Lipljan, so I have built it from the ground and painted and decorated it both within and without”.

Monastery Visoki Decani (High Decani) is One of the jewels of the Serbian medieval civilization, located at the foot of the Prokletije Mountains, in the valley of the river Bistrica. The construction of the church is dedicated to Christ the Pantocrator started in 1327. as the foundation of King Stefan Uros III Nemanjic, later called Decanski.

These are some of the most famous and important monasteries. As we said before it would take a lot of time to say something about all of these amazing monuments of history. The doors of our monasteries are open for the visitors from all over the world. The entrance is either free or is just symbolic. A lot of Orthodox pilgrims are coming to visit every year. Apart from them there are a lot of tourists from all over the Europe and the World.

iSerbia Travel & Events have prepared a lot of different programs and monastery tours, which are giving you the chance to visit different monasteries in different parts of our beautiful  country. It is possible to spend the night in some of the complexes so one can feel the peace and calmness that rules inside of the walls of these saint places.

You can find our Monastery tour description on this link.

See you in Serbia and may peace be with you…